Check out marvelous products at craftycanines.org

Dear Reader, all content is only meant as (hopefully) funny and entertaining veterinary news. This is not real veterinary advice. Please let me know if you feel any of the content is offensive. 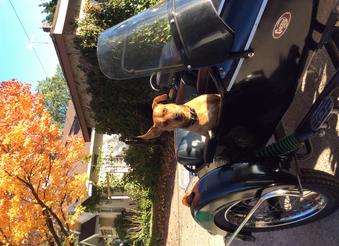 All the (Not So  serious) news fit foR  dogs, cats and their humans....Hamsters Welcome

How does a Pets’ Name Affect its Success in the Workplace?


This was a question asked in a discussion forum at the latest “Aspen Pet Ideas Festival”. Does naming your hamster Montgomery provide him extra recognition and status in the hamster community? Are female rabbits named Victoria more successful in the workplace? These were issues the panel discussed. The general consensus was that pugs with the middle name of Mortimer were 34 % more likely to get hired by major financial investment companies. And poodles named Annabelle broke through the glass ceiling at even more astounding rates. Not a single Maggie was on Goldman Sachs’ payroll in 2019, while 7 Annabelles achieved a position in middle management. No conclusions were drawn from the fact that Agatha, a gerbil from Newark, NJ, recently joined the Apple® board, being in charge of AI development, stating a sample size of one as being insufficient.

The AKC (American Kennel Club) released a report that large numbers of 2021 Dalmatians have been shipped with serious design and manufacturing flaws. The typical black pigmented spots on their fur appear to rub off after frequent baths or prolonged exposure to rain. Upgrade kits including raincoats. Black permanent markers are available upon request.

Anti Vax Movement on the Rise in Canine and Feline Populations

Recent polls involving 272 dogs of varying breeds and 112 feline participants showed a clear trend towards the rejection of common vaccines by pets.

In the canine group 81% were opposed to the common vaccines as administered by veterinarians. Objections to the shots included the use of needles, more needles and lots of needles. Also the simple trip to the vet clinic was described as annoying, terrifying and outright appalling. The assumed bribery with treats during the vet visits was perceived as a pathetic attempt by veterinarians and their staff to atone for their sins and seen as prove of their simple intellectual nature. Canines did however embrace the frequent and thorough vaccinations of cats. The large majority of survey participants also recommended the use of larger needles for their feline counterparts. Chorizo, a 10 year old Chihuahua from St. Paul, MN, stated: “anything smaller than a 12 gauge needle would be no fun at all….”.

Felines uniformly advocated limiting vaccines to geriatric cats over the age of 34 years, and then only if written consent is obtained prior to the vet visit. O’Malley, a 6 year old domestic shorthair cat from Eugene, OR, voiced his opinion: “man, anybody knows vaccines magnetize our bodies. 3 of my family members got sucked into oncoming cars just a few days after getting vaccinated. They were flattened like pancakes. What more prove to you need. Deadly, those vaccines”.


Apple announced the long anticipated ‘Apple Tag Dog Tracker’. The Bluetooth enabled device needs to be ingested by trusting canines. To increase palatability Apple’s lineup includes peanut butter and chicken flavored trackers. At this time engineers are still trying to solve the issue of trackers leaving the body as part of normal elimination within a few days after ingestion, defeating the owner’s ability to actually track their pets.

Apple’s response that dog owners would at least be able to monitor their pet’s bodily functions more closely did not increase consumer satisfaction. Shareholders responded positively to the issue, realizing that shorter duration of use may lead to improved sales numbers.

In the meantime Squuevil, a North American canine hacker group led by a team of Border Collies, provided an easy access hack in canine online chat groups. Downloadable code allows any dog carrying the device inside its body to gain access to Mac OS 11 based squirrel networks as well as mess with its human owner’s in-house wireless network settings. Frequent Amazon or Chewy orders initiated by savvy canines should provide hours of culinary enjoyment.

In the latest setback for Canines Against Vaccines (CAV), a scheduled march at the state Capitol has been postponed due to an outbreak of illness among march leaders.  Said a spokesdog for the group 'Look, I know a lot of people like to paint us as selfish and distempered, but we are just a bunch of dogs who are rabid about individual freedoms and liberties.'  A member of the group relayed their disappointment to us; 'This march would have been great for my social media following; I'm kind of a canine influenzer.'  The cancellation also means the featured music act, New York punk rock group Gogol Bordetello, will not be playing.

A counter protest by the pro-vaccine cat group 'Calicos Against Calici' has also been cancelled due to lack of proper permitting, but in lieu of an in-person protest the organizers ask that each participant protest nap at 2:00pm central standard time in their respective homes.